A friend recently gave me a delicious little present from Starbucks. Salted Almond Chocolate Bites!! (The blue label in this photo).

I notice the strangest things and couldn't help but wonder why it said "gray sea salt". I mean, what's the difference in sea salt and gray sea salt. Why make the distinction on a package?

Gray sea salt is an unrefined sea salt usually found around France's Atlantic Coast. Gray sea salt is gaining fame and popularity lately in culinary preparation and is thought by many to be the best sea salt available.

So basically does that mean it's just sea salt from the French coast? Anyone else know what makes is special? Just wondering. :)


Posted by SimpleSaurus at 12:01 PM No comments:

Email ThisBlogThis!Share to TwitterShare to FacebookShare to Pinterest
Labels: food and drink

Dear Vitamin D...you are my sunshine. It's dark and icky here in Kentucky about half the year and the other half of the year I have to wear sunscreen because I sun-fry too easily.

So we all know that you can get too much sun...especially those of us who are super pale. Because of my paleness, I tend to avoid the sun and last year I had some routine bloodwork done which uncovered a serious Vitamin D deficiency. My doctor prescribed 50,000 i.u. (international units) of Vitamin D weekly for 6 weeks to get my vitamin D levels up. Because vitamin D is fat soluble, it is stored in your fat.

Thinking back on this, I can't help but wonder whether you can overdose on vitamin D. I ask this because my vitamin has vitamin D in it and so does my calcium supplement. During the winter it's unlikely I am exposed to the sun enough to make any vitamin D of my own but during cycling season, I'm outside often. So, can you get too much of a good thing when it comes to vitamin D??

There is no risk of overdosing from Vitamin D from sun exposure because our bodies have a built in overdose prevention system (the darkening of our skin). However, supplemental vitamin D bypasses our built in defense mechanism since you can take vitamin D regardless of how dark your skin has gotten.

It is unlikely a person will overdose on Vitamin D3 (the type contained in many vitamin supplement pills). But, it can happen. The main symptom of vitamin D overdose is excessive accumulation of calcium in the body which causes lack of appetite, nausea, and may lead to kidney problems. Since my multi-vitamin and calcium supplement together only contain 2000 i.u. of vitamin D, there doesn't appear to be a risk of overdose considering I get little to no sun most of the year and wear sunscreen during the summer months. For more information about vitamin D dosing, the Mayo Clinic has a nice little article so click here.

*Disclaimer: I'm just doing research and sharing what I learn. This is not advice.*
Posted by SimpleSaurus at 4:12 PM 1 comment:

Email ThisBlogThis!Share to TwitterShare to FacebookShare to Pinterest
Labels: Health and Wellness

While walking around at Waterfront Park in Louisville yesterday, I got an awesome picture of a modern day Pterodactyl! Ok, it's actually called a heron but I'm pretty sure it's a mini pterodactyl. I'm pretty proud of this awesome picture. :)

1) Herons are often mistaken for cranes and vice versa. In fact, I thought the bird I photographed was a crane but learned it's a heron while looking up info to blog about it.

2) Heron are located on all continents except Antarctica.

3) Herons don't have webbed feet like many birds.  They have four toes per foot. Three of the toes point forward and one points backward. This gives them a little stability and also let's the grip things.

4) Herons have been known to choke to death from trying to swallow fish too big to fit down their throats.

6) The feathers down the back of the heron's head are called plumbs and are important in attracting mates.

7) Roast herons were a popular food at medieval banquets.

8) The fat of a heron killed at midnight was once believed to cure rheumatism.

9) Herons have a specially shaped clam on their third toe for combing their feathers.

Posted by SimpleSaurus at 2:20 PM No comments:

Email ThisBlogThis!Share to TwitterShare to FacebookShare to Pinterest
Labels: animals

My wonderful husband took me for adventure to celebrate our anniversary this weekend. One part of the day we spent riding ziplines through caves in Louisville, KY.  Not only was it my first time on a zipline, the Mega Cavern in Louisville is the only all underground zipline adventure.

Due to the nature of ziplining, I didn't get any pictures of me in action. It was a lot of fun though we didn't go down the line as fast as I thought we would. I curled up into a little ball trying to go faster but it didn't work too well really. lol Ziplines are angled down then back up a slightly so that they slow you down a little at the end of the line (to keep you from crashing into the wall or the guide who is at the end of the line to help catch you). The video above is one of the Mega Cavern's promotional video.


Here are some cool facts about the Mega Cavern:

The Louisville Mega Cavern was an operational limestone mine from 1930s to 1970s.

The cavern has over 17 miles of passageways that run underneath Louisville, KY.

The Mega Cavern is classified by the State of Kentucky as a building which makes it the largest building in the state.

Most of the lights in the Mega Cavern are motion sensor activated to conserve power.

Posted by SimpleSaurus at 2:05 PM No comments:

Whether you drink bourbon (or alcohol at all, for that matter), check this out... It's an interesting little fact of Kentucky culture. :)

Yesterday during our zipline tour in Louisville (I'll be blogging about that also), our guide told us about the importance of limestone in the bourbon industry.

95% of the world's bourbon is made in Kentucky!

Why is Kentucky the home of bourbon?

In one word, limestone!

One of the things I noticed when I moved to Kentucky was the build up of this white mineral deposit on the filter of my aquarium and in my fountain. I later learned it was calcium deposits because the water here in much of Kentucky runs through limestone which filters out a lot of minerals (such as iron) and adds calcium and magnesium. Water low in iron and high in calcium and calcium is good for the fermentation process of alcohol and for the flavor of whiskey.

Bourbon is a type of whiskey. Not all whiskey is bourbon. In order for whiskey to be called bourbon:

1) It must be made in the United States.

3) The whiskey must be aged for at least 2 years in new oak barrels that are charred inside. Most bourbon is aged 4 years or longer.

5) Nothing can be added to enhance color, sweetness, or flavor.

Another random, yet related fact:


Posted by SimpleSaurus at 10:57 AM No comments:

Over the last few posts, I've reviewed five different prenatal vitamins and discussed the pros and cons of each of them. Today I've narrowed my choices down to two and will compare and contrast these too and make a decision. Vitafusion Gummy Prenatal vitamins were immediately ruled out due to their lack of iron and calcium. I then ruled out GNC Prenatal with Iron and Rainbow Light Prenatal vitamins because they're a little higher in folic acid than I think I need. Recommendations for folic acid prior to and during pregnancy is 400-800 mcg. Both of these vitamins have 1000mcg. It's important to realize that many foods also contain folate which is the naturally occuring version of folic acid. (I didn't know folic acid is the synthetic form of the vitamin!) The safe upper limit for folic acid set by the Institute of Medicine is 1,000 mcg/day for adults. For further information on folic acid, click here. So anyways, these two vitamins would provide too much folic acid considering I'd still be eating foods with folate in them (spinach, citrus fruits, etc) and foods fortified with folic acid (orange juice, cereal, etc) as well. ;)

So after ruling out those three vitamins, my two remaining choices are New Chapter Organics Perfect Prenatal and Nature's Way Completia Prenatal vitamins.


Here's a quick visual comparison of the two: 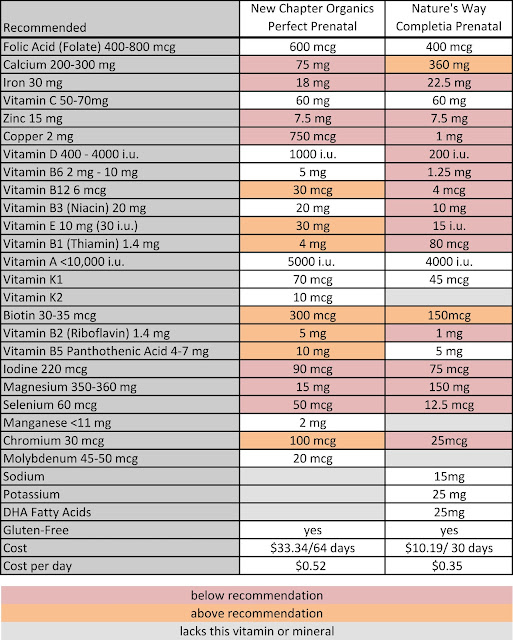 I think either of these two vitamins would be appropriate for me in preparing for pregnancy. Obviously when I finally get to meet with my doctor she can do blood work to determine any other deficiencies and/or recommend a different vitamin if she wants to do so.


Nature's Way is less expensive than New Chapter. But it's also below recommendations in more vitamins. However, it's important to recommend that vitamins are meant to ensure you get the recommendations...not necessarily to provide them at the full dose. I'll also be getting vitamins from the foods I eat. When I looked up reviews on the Nature's Way vitamins, they got 2.5-3 out of 5 stars. Some of the reasons people didn't like them was because you have to take 2 of them twice a day and they are really large. Others commented that they taste horrible and they couldn't take them when they were pregnant due to the smell and nausea. If these beat out of the New Chapter vitamins by a long shot, I might try to deal with the taste and smell, but there's really not a major difference in the two and if either of them provide more vitamins, the New Chapter ones win out. For some of the reviews on the Nature's Way Prenatal Completia vitamins, click the links below:

New Chapter Organics Prenatal vitamins are more expensive than Nature's Way. But the reviews on them are really good. These vitamins average around 4-4.5 out of 5 stars. They have a little more folic acid than the Nature's Way vitamins but not so much  more that I worry I'll get too much. New Chapter vitamins are a bit low in calcium and iron but that's easy to take care of with diet and/or a calcium and iron supplement. I'll be tracking my food intake via myfitnesspal.com so I'll be able to determine if these supplements are needed or not. Some reviews on New Chapter Organics Perfect Prenatal vitamins are available below:

So for now, I'm going to try New Chapter Organics Prenatal vitamins. I'll let you know later how it goes. :)

Meets recommendations for the following:

Exceeds recommendations for the following:

Posted by SimpleSaurus at 11:31 AM No comments:

Meets recommendations for the following:

Exceeds recommendations for the following:

Below recommendation for the following:
Verdict: Maybe

Posted by SimpleSaurus at 11:25 AM No comments:

Verdict: Maybe though the folic acid content is a bit high considering I'd also be eating foods that contain folic acid.


**Disclaimer - I am blogging these to help you learn more about the prenatal vitamins. I'm just a person like you are so do your own research before choosing a vitamin. I'm simply sharing what I learned and what I think about it.

Posted by SimpleSaurus at 9:50 AM No comments: